I only wear my Go Pro on Varx training. Last week I didnt get a lot of great footage. But this week we had a better pace and there was more conflict for me so I got quite a few good battles on the camera. I will be publishing the footage in the next couple of weeks. 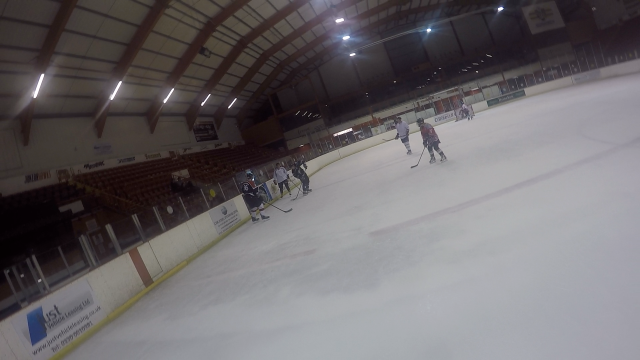 The drills that we work on are generally the same each week and as such we can see a real progression within the team. We try to bring each other on and look after the beginners, trying to bring them up to a good level. I can see the group that started a couple of years ago with me getting a good sense of the game, they have worked on the basics and this year are realising the basic positional and breakout plays.
We still cant get more than one net minder on the Varx session this year. As a defender I find the forwards dont try as hard with no keeper in net. They dont have the same motivation. Realistically you can still work on setting up in the offensive zone. I think after a long training players want to scrimmage for fun and the discipline goes, thats why they go goal hungry at the end. I do it as well after all what is hockey without the fun?
There was no Falcons this week as my chest infection was too much and my worst still I gave it to my Dad so he couldn’t make it either.
That said I did manage to move forwards with the Falcons in that I made real steps to becoming an active player on the team. Last week they were discussing who would be signing for the team this year so they could start training in lines.
This prompted me to discuss with the coach my desire to play for the team in matches. The quality of players is so high that you need to be at a certain level to be even considered. But considered I was. I know in myself how far I need to come before I’m at pace with the rest of the team. I feel that I’m only a couple of months hard training away and I’m certainly improving every week.
Consequencely because of my enthusiam I am now currently training to play not just training. Which makes a huge difference in the mindset of the other players and the coach as it allows them a better idea of how to use me in training. I can be used in lines to see where I fit and who I play with best. They also know to go in harder in order to teach me and bring me up. They want a team member, they know can handle the matches they want to play.
The modern team now also has an important connection to social media. Communication between players and coaches off ice is now a lot easier. 2 years ago when I joined the Varx I was given access to a facebook group that could only be obtained by invitation, with secret settings. This became an imprortant tool to share game times strategies and general team information. This week I had the priviledge of being included in the Falcons group. This act has already made me feel part of the team.
On the group we have already been given homework, looking into a forechecking formation that we will be using this season. Watching the YouTube instruction has able me to focus on the training ahead whilst being off sick this week.
It has also given me access to the order forms for some merchandise. All team members must come to games in a Falcons Jacket or T shirt. I also got a hat, I was particularly pleased that I was able to remain #2 which has always been my hockey number for 20 years.