“They hone their skills by playing each other, Saturday after Saturday for as long as anyone can remember.” Mystery Alaska

The preseason matches are booked and everybody is itching for more ice time. This week there are more Falcon players on the Aardvarx than usual which is good because it raises the bar for Varx players. 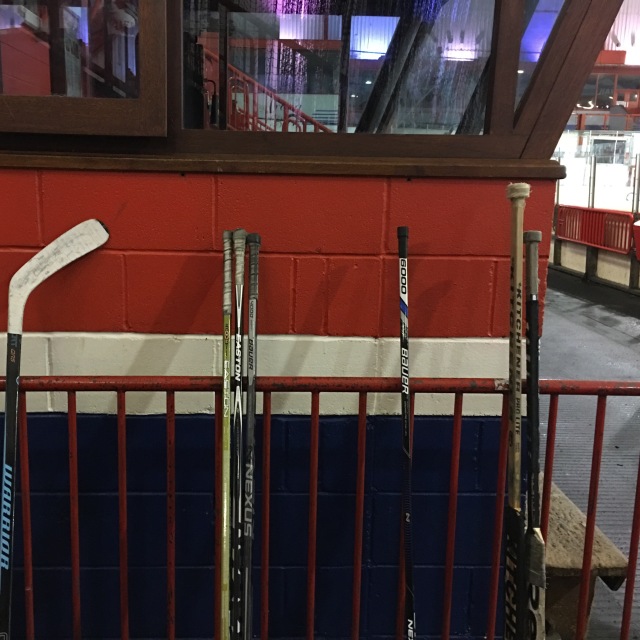 When I train I got into the habit of taking 2 jerseys with me for scrimmage. That way I can weigh up who is on what team and pick the other team accordingly. This started out as banter between my friends and Dad, and it was a way of us all playing together, but recently I use it to pick the side opposite the better players. In particular there is a Falcons player who is always at Varx and always wears white so I tend to wear black. It is of my opinion that you improve better against better opponents, that way I have to push myself each week.
Some weeks there are more who pick whites, and this was one of those weeks. Needless to say it made for some good hockey and loads of effort needed to hold them off.
I have a collection of hockey jerseys accrued over many years. One was a set of 2006 Home and Away Falcons tops from my last season before my break. I found them and since I was training with the team again wondered if it was too arrogant to wear them. I decided in the end that I would wear them as I was proud of my new team and pleased to be part of training again.
The pace of Saturday continued through to the Falcons training on Monday. I had been watching NHL games recently and my team mates and noticed something important. When I’m on the ice I move my feet, constantly moving. This is itself is right. But what I noticed the top players doing was also using a glide technique. This was usually on run up to the net. This gave them 2 advantages, 1 a firm 2 footed base, and 2 the freedom to concentrate on their hands for the dangle or shot. Players used this a lot more than I thought, when they were timing a shot to the net, when they went in for a check, when they were dekeing past someone.
When I saw some of my teammates doing it I knew I needed to apply it. I knew the perfect place to test it.
The drill is a breakout drill, defence men skate backwards behind the net, pick up a puck, skate forwards out, pass the puck to the breaking forward at the boards and then turn back round the net and repeat on the other side. After that the defence man make a break him self full ice.
It is exhausting for the d man, with a lot of leg movement. It is difficult to keep my legs moving and look to hit the tape on the pass. My attempt now was to move my legs hard to the net, glide to make the pass, and the move my legs again to the net to repeat the other side.
It worked like a treat, I was less tired and was able to read the play better, I also hit the pass a lot easier and more consistent.
Since then I have been using it a lot more, legs for quick breaks, then gliding for accurate plays.
This has also been my best week for stamina and I’m going to need it, next week is the last training before the first preseason match again Widnes. Will I get ice time? Will they let me sign? I find out next week.