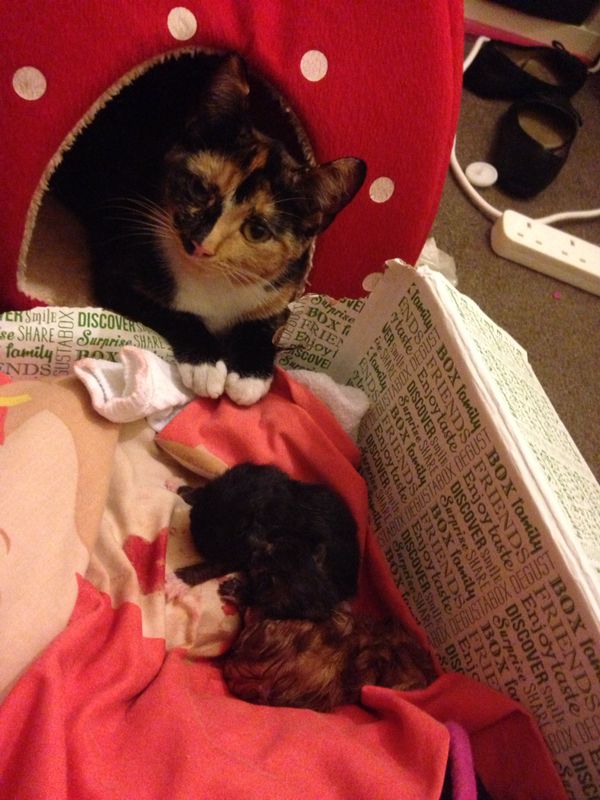 Me and Mrs Berg were sat outside with a glass of wine (hot chocolate for the woman with child), with the promise of cheesy home-made nachos on the cards, when all of a sudden one of the little ones comes running down the stairs. This is not unusual and can normally be chalked up to Sod’s law. This time, however our 9 year old couldn’t be bribed back to bed with a drink. “It’s the cat,” she said.

We have (deep breath) 4 cats, 5 fish, a bearded dragon and a pet addiction. It’s easy enough for me to blame my wife for her endless need to own new animals, but I confess now I am just as bad.

One of the two younger cats we recently adopted had got pregnant early on, and it was to this one that my eldest was referring. Sox had been scratching around about the house for days so we knew that it was nearly time.

We did object to her making a nest on the our youngest daughters bed though so we moved her along into our room and I started to Google “how to help a cat give birth”, all the while thinking maybe this was something I should have done earlier. As we were ushering the cat into the bedroom there were definite signs of a head popping out.

The buzz and excitement was tangible as my daughters buzzed around me, eager to see the
kittens being born. Tactically, after a quick peek I instructed the older to take the younger into her bed. I was at least 4 steps behind on the how to and was eager to get ahead quick.

My wife was totally into it, not needing the reassurance of a Google search she dove straight
in and just treated the cat as she would a human. It was nice her being on my side of the
labour for a change.

Our neighbours across the road have vinyl gloves in there medical cabinet so I nipped over and borrowed some. Well of course as soon as she heard she wanted to see so we swapped houses for a while. This gave me time to get ahead of the how to. By the time we swapped back I had a to do list.

I pride on my family being very capable at just getting on with it, and this was one of those
times. The cat didn’t know what to do with the kitten and had licked her clean, but she had now put some distance between them while she waited for the next one.

So, I rounded up a few items; box, blankets, hot water bottle, brew for the midwife, when the
second of the litter arrived. By this time we were experts. I could also ask relevant questions to prove I was paying attention. Had she broke the amniotic sack, did the umbilical cord break, did she. Eat. The. Placenta. Ugh. Well I’m not squeamish but I’m glad my position was on the landing providing back up. That said I knew it would be my job to handle anything sticky or overly disgusting.

The cat didn’t know what to do with the kitten and had licked her clean, but she had now put
some distance between them while she waited for the next one.

Suddenly I was up. It was my time. The cat had moved to the birthing point we had set up. Leaving the kitten ready for me to scoop up and place delicately in the box. I donned the glove and picked up the kitten. My wife started to get the camera ready for my proud moment. Then the kitten started to mew in distress, the cats eyes perked up and caught me red handed. Meowing frantically for me to kindly in hand her child. Before the camera could click I had to put tuck the kitten up in the box and all was well.

Once the kitten was nice and warm Sox began to push again.

The second kitten came into the world at 10.50pm.

It was a truly remarkable experience, like another notch on my belt, gave birth to kittens. I snuck in and let the oldest, who was lay awkwardly with the her sibling on top of her, that another one had been born. She shrieked and I had to quickly assure her she could she them in the morning.

At this point something surreal happened. Something that doesn’t normally happen to me
during any labour previously. I was given a break.

My wife had been been taking pictures frantically throughout and after the neighbor had been alerted to the second cute ball of fluff she was keen to see. So again, we swapped.

About 10 minutes later, I was sat in front of her TV and The Matrix Reloaded came on. Neo had a dream, Mopheus was lobbying for another ship to stay in the Matrix, Agent Smith resurfaced, and I was hooked. I realized that Link from the Matrix was played by Harold Perrineau. He also played Micheal from Lost, and Augustus in Oz, AND Mercutio in Romeo and Juliet. I never knew. Totally engaged.

I never realized how much time had gone by until I got a call saying the third kitten had been
born.

The neighbor thought the light ginger kitten should be called Simba. I came back and Mrs Berg was tired. She was convinced there would be a 4th. There wasn’t. But we waited an hour before we were sure. By this time the kittens still needed suckling so we moved the kittens to her in her basket and they all cuddled up lay down and began to feed.

What a night. As I lay exhausted on the landing (so that all the kids didn’t just barge in in the morning) I realised what a night I truly had. 3 lives came into the world. I realized just how long Harold Perrineau had featured in my life, and I realized I never did get my
nachos with cheese.